Water authority of the Woudagemaal

Since 1920, the Woudagemaal has been making an important contribution to prevent the Frisian country from overflowing in heavy rainfall. The excess Frisian boezem water was removed for centuries by  wind mills  and with the opening of the steam pumping station to the Zuiderzee and the Wadden Sea. During the 19th century, draining the water became more problematic by the sinking of the peat soil. The construction of the steam pumping station at Lemmer was a major leap forward for water management in the water-rich province.

The arrival of modern pumping stations

In the early sixties of the last century, water authorithy in Friesland has been further improved. With the construction of the electric Hoogland pumping station near Stavoren and the closure of the Lauwerszee in 1969, the Woudagemaal had to pump considerably less often. Nevertheless, the monumental steam pumping station still plays a crucial role in special situations, such as with an extremely high level of drainage water. In a few days, an enormous amount of excess water will be pumped from the Frisian basin to the IJsselmeer. The pumping station can pump 6 million m³ of water per day, which is the entire contents of the Sneekermeer in two days. According to current standards, this is a considerable capacity. The pumping station is owned by Wetterskip Fryslân.

The largest still operational steam pumping station in the world, is seen as a highlight of Dutch hydraulic engineering.

The largest, still working steam pumping station in the world is accessible to visitors almost all year round. Our World Heritage offers activities, facilities and arrangements for both young and old.

Do you want to see the Woudagemaal in action? View the agenda for the unique training days! 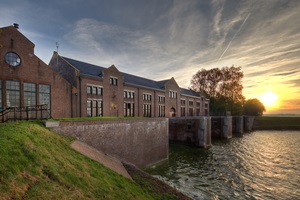